As defined in the Agreement concluded between Italy and the European Commission, the measures relating to the port and interport system should be structured in Integrated Logistics Areas (ALI - Aree Logistiche Integrate) and their goal should be that of improving the competitiveness of local regions. The aim of the investment programme in each of the five Integrated Logistics Areas is to construct harbour, inner harbour and interport infrastructures, with corresponding connections to the multimodal corridors of the European transport network.

The following five integrated logistics areas have been singled out:

South-eastern sector of Sicily (Quadrante Sud Orientale della Sicilia). Sicily, given its geographical position, has for some time served as a logistics platform in the heart of the Mediterranean. There are plans for measures at the ports of Augusta, Messina, Catania and the Interport of Catania. The stretch of railway between Catania and Syracuse, part of the Scandinavian-Mediterranean corridor, will have to be developed and higher levels of efficiency guaranteed for the Interport of Catania.

Gioia Tauro Logistics Pole (Polo Logistico di Gioia Tauro). The aim is to increase the traffic transiting through the port and encourage the process of modal diversion towards the rail system. Measures are envisaged to improve the accessibility of the node and the operational capacity of the wharves and to complete the rail network on the Metaponto-Sibari-Paola track section, which is part of the Tyrrhenian railway Salerno/Battipaglia-Reggio Calabria.

System in Puglia (Sistema Pugliese). The status of Puglia within the Italian network of major transport infrastructures is still peripheral in relation to national and international flows of traffic and some of the areas located within the region remain marginalised. The measures envisaged must begin by creating an integrated system comprising the three ports and the Interport of Bari, making the most of their specialised roles which, by now, have emerged with sufficient clarity. In particular, the ‘last mile’ connections to the harbour nodes making up the triangle Bari-Brindisi-Taranto must be strengthened, with special emphasis on Interporto Regionale della Puglia.

Campanian logistics area (Area Logistica Campana). The main shortcomings in the Campanian network of infrastructures concern its poor road and rail networks and the lack of integration between the various types of infrastructure and transport. The OP focuses on developing the connections between the Ports of Naples and Salerno, the Interports of Nola and Marcianisee and the trans-European transport network (TEN-T). Actions will be required to increase international commercial marine traffic towards Southern Italy so as to develop use of the port system Naples-Salerno. There will be a need to connect the various industrial districts in the zone with the existing logistics nodes: Interports of Nola, Marcianise-Maddaloni and Battipaglia and the ports and airports of Naples and Salerno through rail connections and/or intermodal terminals.

Western Sicily sector (Quadrante Occidentale della Occidentale). This area features a transport and distribution hub for trade along the Corridor and is one of the nodes for the interception of traffic flows towards the northern and western Mediterranean. There is agreement on the need for a governance system for the port system Palermo-Termini Imerese and the Interport of Termini Imerese and on the rail network providing access. 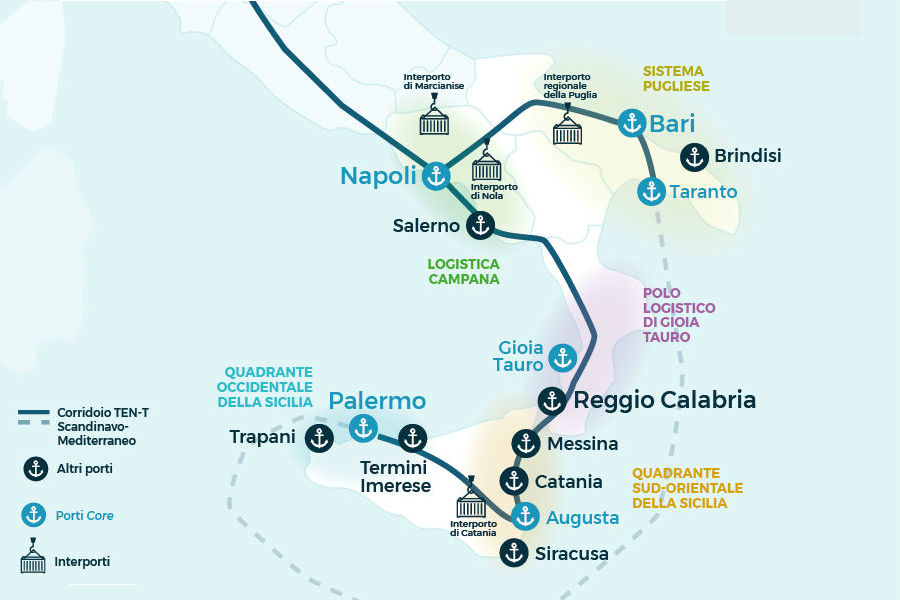